Please refer to the Class 10 Science Sample Paper below. These CBSE Sample Papers for Class 10 Science have been prepared based on the latest guidelines and examination patterns issued for the current academic year. We have provided Term 1 and Term 2 sample papers with solutions. You can click on the links below and access the free latest CBSE Sample Papers for Science for Standard 10. All guess papers for Science Class 10 have been prepared by expert teachers. You will be able to understand the type of questions which are expected to come in the examinations and get better marks.

Question. The given lens has a focal length of 10 cm. The object of height 2 mm is placed at a distance of 5 cm from the pole. Find the height of the image.

Question. Which of the following mirror is used by a dentist to examine a small cavity in a patient’s teeth?
(a) Convex mirror
(b) Plane mirror
(c) Concave mirror
(d) Any spherical mirror

Question. While looking at the given diagram, Nalini concluded the following:

(i) the image of the object will be a virtual one.
(ii) the reflected ray will travel along the same path as the incident ray but in opposite direction.
(iii) the image of the object will be inverted.
(iv) this is a concave mirror and hence the focal length will be negative.
Which one of the above statements are correct?
(a) (i) and (ii)
(b) (i) and (iii)
(c) (ii, iii) and (iv)
(d) (i, ii, iii) and (iv)

Question. If a beam of red light and a beam of violet light are incident at the same angle on the inclined surface of a prism from air medium and produce angles of refraction r and v respectively, which of the following is correct?
(a) r = v
(b) r > v
(c) r = 1/v
(d) r < v

Question. The given graph depicts a neutralization reaction (acid + alkali → salt + water).The pH of a solution changes as we add excess of acid to an alkali.

Which letter denotes the area of the graph where both acid and salt are present?
(a) A
(b) B
(c) C
(d) D

Question. Identify the correct option from the given table which represents the type of reactions occurring in step 1 and step 2.

Question. Which of the following two combinations are correct?

Question. In the reaction of iron with copper sulphate solution: CuSO4 + Fe → Cu + FeSO4
Which option in the given table correctly represents the substance oxidised and the reducing agent?

Question. Examine the given figure and state which of the following option is correct? [one small box in the figure is equal to 1 cm]

Question. Which diagram shows image formation of an object on a screen by a converging lens?

Question. The angle of incidence from air to glass at the point O on the hemispherical glass slab is.

Question. In the above diagram light is travelling through different media. It is noted by a scientist that ∠1 = ∠3 = ∠4 but ∠2 < ∠1. Which of the following statement would be correct?

Question. In which of the following groups of organisms, food material is broken down outside the body and then absorbed in?
(a) mushroom, green plants, amoeba
(b) yeast, mushroom, bread mould
(c) paramecium, amoeba, cuscuta
(d) cuscuta, lice, tapeworm

Question. Carefully study the diagram of the human respiratory system with labels A, B, C and D. Select the option which gives correct identification and main function and /or characteristic.

(a) (i) Trachea: It is supported by bony rings for conducting inspired air.
(b) (ii) Ribs: When we breathe out, ribs are lifted.
(c) (iii) Alveoli: Thin-walled sac like structures for exchange of gases.
(d) (iv) Diaphragm: It is pulled up when we

Question. The table shown below gives information about four substances: A, B, C and D.

Question. A cable manufacturing unit tested few elements on the basis of their physical properties.

Question. In which of the following setups would the bulb glow?

Question. Identify gas A in the following experiment.

Question. Which of the given options correctly represents the parent acid and base of calcium carbonate?

Question. A prism ABC (with BC as base) is placed in different orientations. A narrow beam of white light is incident on the prism as shown in below figure. In which of the following diagrams, after dispersion, the third colour from the top of the spectrum corresponds to the colour of the sky?

Question. The given figure shows a schematic plan of bloodcirculation in humans with labels (i) to (iv). Identify the correct label with its functions?

Question. The table given below shows the reaction of a few elements with acids and bases to evolve hydrogen gas.

Question. Identify the option that indicates the correct enzyme that is secreted in location A, B and C.

Question. Plants use completely different process for excretion as compared to animals. Which one of the following processes is not followed by plants for excretion?
(a) They can get rid of excess water by transpiration.
(b) They selectively filter toxic substances through their leaves.
(c) Waste products are stored as resins and gums in old xylem.
(d) They excrete waste substances into the soil around them.

Question. Identify the phase of circulation which is represented in the given diagram of heart. Arrows indicate contraction of the chambers shown.

Question. In which year is concentration of hydrogen ion the highest?

Question. The diagram shows the reaction between metal and dil. acid.

Question. In a person the tubule part of the nephron is not functioning at all. What will its effect be on urine formation?
(a) The urine will not be formed.
(b) Quality and quantity of urine is unaffected.
(c) Urine is more concentrated.
(d) Urine is more diluted.

Question. In which of the following groups of organisms, blood flows through the heart only once during one cycle of passage through the body?
(a) Rabbit, Parrot, Turtle
(b) Frog, Crocodile, Pigeon
(c) Whale, Labeo, Penguin
(d) Shark, Dog fish, Stingray

Question. Assertion: Fresh milk in which baking soda is added, takes a longer time to set as curd.
Reason: Baking soda decreases the pH value of fresh milk to below 6.

I. The Figure shown below represents an activity to prove the requirements for photosynthesis. During this activity, two healthy potted plants were kept in the dark for 72 hours. After 72 hours, KOH is kept in the watch glass in setup X and not in setup Y. Both these setups are air tight and have been kept in light for 6 hours. Then, Iodine Test is performed with one leaf from each of the two plants X and Y.

Question. The function of KOH is to absorb
(a) Oxygen.
(b) Carbon dioxide.
(c) Moisture.
(d) Sunlight.

Question. This experimental set up is used to prove essentiality of which of the following requirements of photosynthesis?
(a) Chlorophyll
(b) Oxygen
(c) Carbon dioxide
(d) Sunlight

II. Noor, a young student, was trying to demonstrate some properties of light in her Science project work. She kept ‘X’ inside the box (as shown in the figure) and with the help of a laser pointer made light rays pass through the holes on one side of the box. She had a small butter-paper screen to see the spots of light being cast as they emerged.

Question. Her friend noted the following observations from this demonstration:
(i) Glass is optically rarer than air.
(ii) Air and glass allow light to pass through them with the same velocity.
(iii) Air is optically rarer than glass.
(iv) Speed of light through a denser medium is faster than that of a rarer medium.
(v) The ratio: sin of the angle of incidence in the first medium to the ratio of sin of angle of refraction in the second medium, gives the refractive index of the second material with respect to the first one. Which one of the combination of the above statements given below is correct.
(a) (ii), (iv) and (v) are correct.
(b) (iii) and (iv) are correct.
(c) (i), (iv) and (v) are correct.
(d) (iii), (v) are correct.

Question. What could be the ‘X’ that she placed inside the box to make the rays behave as shown?
(a) a converging lens
(b) a parallel-sided glass block
(c) a plane mirror
(d) a triangular prism

III. The Salt Story
The salt pans in Marakkanam, a port town about 120 km from Chennai are the third largest producer of salt in Tamil Nadu. Separation of salt from water is a laborious process and the salt obtained is used as raw materials for manufacture of various sodium compounds. One such compound is Sodium hydrogen carbonate, used in baking, as an antacid and in soda acid fire extinguishers. The table shows the mass of various compounds obtained when litre of sea water is evaporated.

Question. Which compound in the table reacts with acids to release carbon dioxide?
(a) NaCl
(b) CaSO4
(c) CaCO3
(d) MgSO4 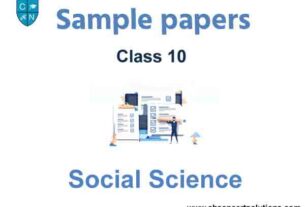