➣ Hydrocarbons are composed of Carbon and hydrogen.
➣ The important fuels like Petrol, kerosene, coal gas, CNG, LPG etc. are all hydrocarbons or their mixture.
Sources:
Petroleum and natural gas are the major sources of aliphatic hydrocarbon while coal is an important source of aromatic hydrocarbons. The oil trapped inside the rocks is known as petroleum. PETRA – ROCK, OLEUM – OIL. The oil in the petroleum field is covered with a gaseous mixture known as natural gas. The main constituents of the natural gas are methane, ethane, propane and butane.

The molecules are held together only by weak Van der Waalls’ forces. Since we known that the magnitude of Van der Waalls’ forces is directly proportional to the molecular size. Therefore, the boiling point increases with increase the molecular size i.e. with increase in number of carbon atoms. Noted:- the boiling points of the branched chain Alkanes are less than the straight chain isomers.

This is due to the fact that branching of the chain makes the molecule more compact and thereby decreases the surface aria and consequently, the magnitudes of Van der Waalls’ forces also decrease.

Noted:- Iodination is a reversible reaction. So it is carried out by heating alkane in the presence of some oxidizing agent like iodic acid (HIO3) or nitric acid (HNO3) or mercuric oxide (HgO) which oxidizes HI formed during the reaction.

Noted:- Fluorination of alkane takes place explosively resulting even in the rupture of C— C bond in higher alkanes.

The reaction occurs as:

This method is also called dehydrogenation or hydroforming Similarly, heptane gives toluene, n-Octane give o-xylene and 2, methyl heptane give m-xylene.

6. Thermal decomposition or Pyrolysis or cracking or Fragmentation: – when higher alkanes are heated at high temp (about 700-800k) in the presence of alumina or silica catalysts, the alkanes break down to lower alkanes and alkenes.
CH3-CH2-CH3 → CH3-CH-CH2 + CH3-CH3 + C2H4 + CH4

This reaction is used for the industrial preparation of hydrogen from natural gas.

2. From Haloalkanes: – dehydrohalogenation
(E2 or 1,2-elimination or Bita – elimination)

Peroxide effect or Kharasch (Anti Markownikoff’s addition):- In 1933 Kharasch and Mayo observed that when HBr is added to an unsymmetrical double bond in the presence of organic peroxide, the reaction take places opposite to the Markovnikov rule.

Noted:- peroxide effect is applicable only to HBr and not to HF, HCl and HI.
Addition of HF, HCl and HI takes place according to Markovnikov’s rule even in the presence of peroxide.

Noted:- The alkaline potassium permanganate solution is known as Baeyer’s reagent. It has bright pink colour. It oxidizes alkenes to glycols which is colour less. This reaction is used as a test for the presence of double bond in a molecule. This is also known as Baeyer test.

By the action of water on calcium carbide:-

Noted:- It may be noted that the hydrogenation can be controlled at the alkene stage only. This is possible by using a Lindlar’s catalysts or sodium in liquid NH3 at 200k temp..

5. Polymerisationa.
a. Linear polymerisation: of ethyne gives polyacetylene or polyethyne which is a high molecular weight polyene containing repeating units of (CH = CH – CH = CH ) and can be represented as —(CH = CH – CH = CH)n —
b. Cyclic polymerization- results in the formation of aromatic compound.

Acidity of Alkynes- Terminal alkynes are acidic in nature.

Resonance and stability of benzene – Benzene is a hybrid of various resonating structures.

The orbital overlapping picture benzene – All the six carbon atoms in benzene are sp2 hybridized and these hybrid orbitals form sigma bonds.

The unhybridised p orbital of carbon atoms are close enough to form a π bond by lateral overlap.

2, . . .). This is often referred to as Hückel Rule.
Preparation of Benzene:
(i) Cyclic polymerisation of ethyne:
(ii) Decarboxylation of aromatic acids:

(iii) Reduction of phenol: Phenol is reduced to benzene by passing its vapours over heated zinc dust

Question. What are hydrocarbons?
Ans. Compounds of hydrogen and carbon.

Question. What is the general formula of alkanes?
Ans. CnH2n+2

Question. What is the general formula of alkynes?
Ans. CnH2n-2

Question. Out of ethylene and acetylene which is more acidic and why?
Ans. Acetylene, due to greater electonegativity of the sp hybrid carbon.

Question. Name two reagents which can be used to distinguish between ethene and ethyne.
Ans. Tollen’s reagent and ammonical CuCl solution.

Question. How will you detect the presence of unsaturation in an organic compound?
Ans. Generally Unsaturated organic compound decolourise Bayer’s reagent and Bromine water.

Question. Write the IUPAC names of the following

Question. What are the necessary conditions for any system to be aromatic?
Ans. A compound is said to be aromatic if it satisfies the following three conditions: (i) It should have a planar structure.
(ii) The π–electrons of the compound are completely delocalized in the ring.
(iii)The total number of π–electrons present in the ring should be equal to (4n + 2), where n = 0, 1, 2 … etc. This is known as Huckel’s rule.

Question. How would you convert the following compounds into benzene?
(i) Ethyne (ii) Ethene

Question. Suggest the name of Lewis acids other than anhydrous aluminium chloride which can be used during ethylation of benzene.
Ans. anhydrous FeCl3, SnCl4, BF3 etc.

Question. Although benzene is highly unsaturated, it does not undergo addition reactions, why?
Ans. Because of extra stability due to delocalization of π-electrons.

Question. What are alkanes? Why are they called paraffins?
Ans. Those hydrocarbons which contain single bond between carbon- carbon are called alkanes. They are called paraffins because they are very less reactive (Latin- Parum= little, affins = affinity)

Question. How can ethene be prepared from (i) ethanol (ii) ethyl bromide?
Ans. (i) Ethene from ethanol- by acidic dehydration of alcohols

The final product is ethanal with molecular mass

Secondary carbocations are more stable than primary carbocations. Hence, the former predominates since it will form at a faster rate. Thus, in the next step, Br – attacks the carbocation to form 2 – bromopropane as the major product.

Secondary free radicals are more stable than primary radicals. Hence, the former predominates since it forms at a faster rate. Thus, 1 – bromopropane is obtained as the major product.

Question. How will you separate propene from propyne?
Ans. By passing the mixture through ammonical silver nitrate solution when propyne reacts while propene passes over.

Question. Write is the structure of the alkene which on reductive ozonolysis gives butanone and ethanol,
Ans. CH3CH2C(CH3)=CHCH3 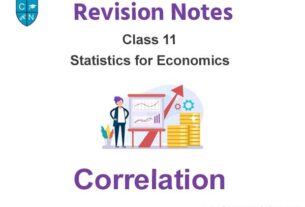 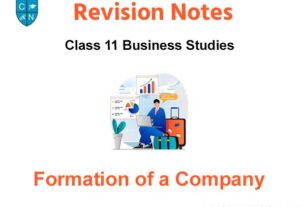 Formation of a Company Class 11 Business Studies Notes And Questions 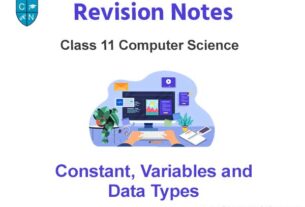